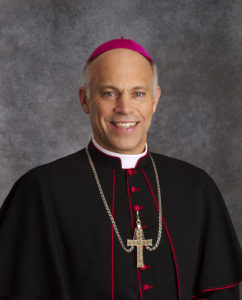 Salvatore Joseph Cordileone was born in San Diego in 1956. His roots run deep in San Diego. He attended Crawford High School, San Diego State University, the University of San Diego, and St. Francis Seminary in San Diego. He was ordained a priest of San Diego July 9, 1982. He was appointed Auxiliary Bishop of San Diego on July 5, 2002. He earned his Doctorate in Canon Law from the Pontifical Gregorian University in Rome. In 1995, he was called to Rome and served seven years as assistant at the Supreme Tribunal of the Apostolic Signatura, the Church’s highest canonical court.