Editors Note: We are very pleased to offer you this conversation between two fine Catholic artists. Anne Redmon, the interviewer, is a wonderful Catholic novelist whose work we highly recommend. To learn more about her life and work, check out the Catholic Arts Today interview “When I Could No Longer Bear the Pain of Not Being Catholic.”  Anne interviews the sculptor Caroline Coate about her evocative terra cotta bas-relief Stations of the Cross which tell the story of Christ’s passion entirely through depictions of the hands.  Photographs of the Via Crucis are appended below the interview. But first Anne Redmon’s introduction:

I have never entered a Catholic Church that lacked Stations of the Cross lining the walls of its nave and, like many, I follow them during Lent. I certainly did not expect to find anything to do with Christ’s Passion on a sunny summer afternoon in a London flat but God, as they say, is full of surprises.

It was two years ago when a neighbor asked my husband and me to lunch; her daughter Caroline was visiting from Rome where she then lived. The conversation turned to art, and our hostess, a painter herself, urged Caroline to tell us about an exhibition of her work that had been held in Saint Sylvia’s Chapel near the ancient Monastery of St Gregory the Great in Rome. Caroline duly fetched the catalog and there it was: the whole Via Crucis in 14 terracotta bas-reliefs consisting only of hands.  From Pilate’s washing of his to Christ’s shrunken by death, the entire heart-breaking story unfolded, told in gestures alone.

It is strange to me how quickly I recognized which Station the hands represented. My husband, a non-Catholic unfamiliar with the Via Crucis, sat bolt upright like me. The images took us both directly there, from a London flat straight to Calvary.

The memory still gives me the shivers. It is odd to think that so abstract a concept should have this effect but just as treading the famous labyrinth marked out on the floor of Chartres Cathedral recreates a pilgrimage to Jerusalem, the Way of the Cross is a journey into the dark horror of Christ’s suffering that became our redemption. Only a contemplative artist could have felt her way into that and could have created so lasting an impression.

Two years later, I finally tracked Caroline down when she returned to London to live and I have asked her to tell us the story of the bas-reliefs.

Anne Redmon: When did you get the idea to represent the Via Crucis in this original way?

Caroline Coate:  I grew up in a practicing Catholic family where Sunday Mass was the anchor of our week, God always present in our lives – in the Tabernacle and in the Gospels, which I loved.

One summer, I was relaxing in the garden of our family cottage in the South of France when, out of the blue, the idea of doing the Stations came to me. They would show only the hands of Jesus, Mary, Simon of Cyrene, and the others, created out of clay to make terracotta bas-reliefs. I roughed out some ideas on the back of an envelope and realized I couldn’t remember their order.

Very excited, I told my mother about my idea. An artist too, her reaction was down-to-earth: hands are one of the hardest things to draw, she pointed out, and I had never worked in clay.

I might have dropped the project then and there but I felt impelled to do this Via Crucis – I truly believe it was inspired by the Holy Spirit. So, that September, back in Rome, I asked a sculptor-friend to teach me the techniques necessary for carrying out the terracotta bas-reliefs. It was the start of a long journey.

Anne Redmon: So you started from scratch! Tell us about what must have been an arduous process.

Caroline Coate: The creation of the Stations was intense and protracted. I was teaching full-time and could work on them only a few hours a week.

I started by working out the poses for the hands, deciding which hands to use: for example, in Station X Jesus is stripped of his garments I chose the soldier’s rough, brutal hand with its broken nails throwing down the dice. For Station XI Jesus is nailed to the Cross, I had to decide whether to adopt the traditional placing of the nail, in the center of Jesus’s palm, or the more historically-correct position of the nail through the wrist. I also decided to make the hands life-size to heighten their presence to the beholder.

These choices were vital to tell the story of the Lord’s Passion, condensing a lot but still recognizable in context.

I made many preliminary studies, making drawings and taking photographs of anybody I could get to model (including a priest!). At last, I started modeling the wet dark-grey clay, adding and scraping away, working out how to convey different textures: skin, wood-grain, gritty earth, cloth, and so on. Then, after weeks of work, I took the first heavy bas-relief to be fired. The moment it was unwrapped was heart-stopping for me.  Out of fourteen, two were cracked but I decided to keep them and mend them; their imperfections are a reminder of ours.

Finally, there was a process of adding color to unify the different batches of clay. After firing each had varying tones of terracotta, so I used colored waxes, giving each Station a satiny patina. I chose clay, that humble material used by God to create man. The Passion is Jesus, the Man-God, suffering and dying on the Cross for our salvation. I then chose wood – a reminder of the Cross – for the backing of each Station.  The metal brackets that hold the terracotta bas-relief to the wooden board are inspired by the nails.

Anne Redmon: Is there anything in your life or artistic experience that helped you to realize your extraordinary idea?

Caroline Coate: I have always found hands expressive and, in sign language, actually speaking. In fact, my Art School thesis was on the mime Marcel Marceau. By focusing on the hands involved in the story of the Passion, the beholder is drawn in to recreate the scene through imagination (unfettered by traditional imagery), empathy, and meditation.

Like an icon, each Station creates a space, for stillness, contemplation, and prayer.

There are many similarities: both are “written”, the icon with paintbrushes, the clay with sculpting tools. They both use natural materials: wood, organic glue, linen, egg, earth and mineral pigments for icons; clay, water, and fire, for the other. Both have a tactile end-product. In the first, a long tradition of showing devotion and reverence by kissing the icon; in the second, a desire to touch the bas-reliefs with their enticing patina.

Anne Redmon: What does being a Catholic artist mean to you?

Caroline Coate: My faith is central to how I see the world around me: people, events, nature, and artifacts fill me full of wonder and gratitude. I find beauty in unexpected places and seek God in the everyday. I love sharing my joy in the colors, shapes, lines that surround us and I hope that my work may help others to stop, look and contemplate – to have a moment of stillness in their busy, stressful lives.

My greatest influence is Matisse whose pen and ink drawings of fruit and flowers – his wonderful colors – I discovered at the age of 13, when my parents took me to his museum in Nice.

I love this quotation of his: “Je vais en ce moment, tous les matins, faire ma prière, le crayon à la main… pénétré d’admiration pour l’œuvre divine. N’est-ce pas une façon de prier? … (au fond je ne fais rien moi-même car c’est Dieu qui conduit ma main)”.(Translation: ‘At the moment, I go out [into the garden] to pray every morning, pencil in hand… imbued with admiration for the divine masterpiece. Is that not a way to pray? … In the end, I myself do nothing as it is God who guides my hand.’) CC

Caroline Coate, educated in Brussels and in London, is an alumna of both Chelsea College of Art and Wimbledon College of Art famous for theatre design. She worked and lived in Rome for many years. Her father Randoll Coate, a war hero and British diplomat, became the celebrated designer of labyrinths and mazes for stately homes, Longleat among them. He died in 2005. Caroline’s mother is the painter Pamela Dugdale Moore. The Coates, a devout Catholic family with Scottish roots, have lived extensively abroad, especially in France, but are now based in London.

A second handmade casting of the Stations, acquired by St Joseph’s Catholic Church in Oakham, Rutland, grace its walls. As a sculpture, six such castings may be made from the original, each series numbered.  .Readers who wish to learn more or to commission a copy of her work may write her at carolinecoate@yahoo.com 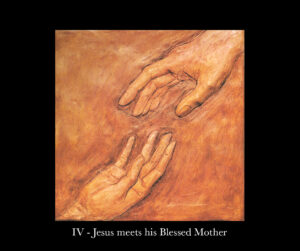 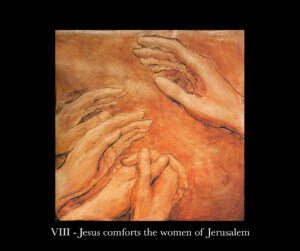 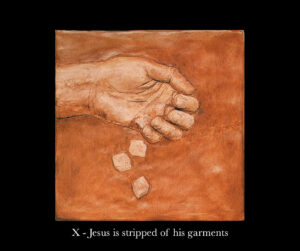 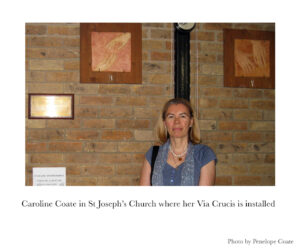 The Recollection of Claude McKay

Mater Dolorosa in Via Crucis

I Point My Tan-Topped Hands To Him, (a God poem)